Israel HaYom: ‘In the supermarket of our ideas, everything is accessible’ 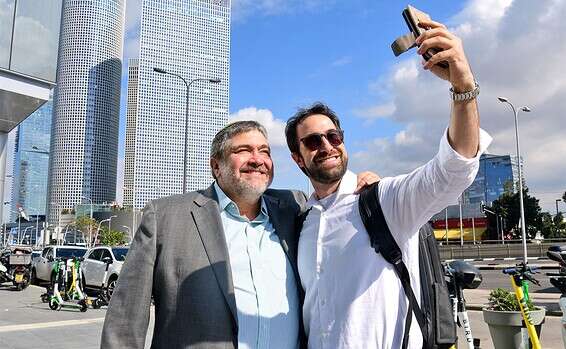 “I get up every morning and help people make their dreams come true – what more can I ask for?” With starry eyes and a huge smile, Jon Medved defines his work, or maybe the essence of his life. If you will, Medved’s appearance and his behavior reminds one of the basketball commentator Shimi Riger: he spices his answers with a touch of Yiddish and a few choice four-letter words in English, but most of all with a lot of warmth.

It’s for a good reason that he is one of the most exciting and interesting personalities in the Israeli high-tech sector, and his image in the industry is well-known and complex. On the one hand, he is a stubborn boss who pushes and yells when needed, and there are those who say too often, but along with this no one doubts that this is a person who was responsible for one of the biggest revolutions in the history of Israeli high-tech.

Medved is well-known in the Israeli business community, after having turned his vision in the past decade into a business empire.  His company – OurCrowd – will be celebrating its success at a huge conference in Jerusalem this coming Thursday. The platform enables the public to invest relatively small sums (a minimum of $10,000) in various startups alongside huge venture funds. The company succeeded in changing the rules of the game that were thought to be clear and strict.

So how can one describe what he has done to a market that has been stagnant for the past 50 years? On the one hand, OurCrowd is a crowdfunding platform that enables investment, and it’s also a venture capital fund that has raised $1.4 billion, invested in some 200 companies and 20 feeder funds and has made 36 exits.

As already noted, it’s a strange bird. Some investments by the company are relatively small and are made at the early stages of the path to an exit. But others can reach double-digit millions of dollars in later-stage companies.  Their spreading of risk and their large influence in many sectors make them a substantial force in the venture capital investment scene in Israel.

“Look out from this window for a moment,” he said and glances at the New York-like horizon from the 61st floor of the Azrieli Sarona Tower.  The Tel Aviv above tells the whole story.  On the one hand, the storms will flood the city this weekend as well, but they will not stop the crazy building to the sky, wherein hundreds of offices young men and women are searching for the next exit.

“We are not inventing anything,” adds Medved. “Abraham, Isaac – they were all in the innovation business and attempted to break out into new frontiers even in biblical times. We, the Jews, were always involved in the attempt to invent something new, in a desire to change the world and we introduced a philosophy for every purpose. Today it has taken shape in the high-tech sector, but it’s not really something new in our history.”

Medved, 64, admits that next week’s conference excites him exactly like the days when he began his journey.  When you ask him about what journey he is referring to, you get a gripping life story.

His parents, both born in the US, were members of the group that founded Kibbutz Sasa on the northern border, and later returned to San Diego, where his father worked as a rocket scientist, who took his son surfing on his free time. At university he studied history and spoke of socialism and grew long hair – it was of course Berkeley of the 1970s. The stronghold of anti-Israeli academic establishment at Berkeley was no different then to what it is today and Medved understood this when he returned from a visit to Israel in 1973.

“I returned to university and suddenly I saw protests against Israel and the Jews,” he recalled. “I told myself, ‘What the hell? Do you have any idea about what you are protesting about? ” I understood there is no one to talk to and I said ok, I will go out on a counter-protest and will convince other Jews to join.

As a result of this situation I clearly understood my connection to Judaism and Israel, and that it was something strong that could not be explained and anyone who understands what I am talking about, simply gets it.” He became a public affairs activist for Israel throughout the US, from the West coast to the East coast but he understood at the time there was only one way to silence the storm within him.

Medved immigrated to Israel. After attending a meeting at searched for himself.  He went with his father to a meeting at Rafael, Israel’s top military defense technology developer, he understood a thing or two about his path.

“Very quickly they told me that the word that describes me is  ‘wheeler-dealer,’ and if that’s the way I am and also good at it then I should take advantage of my potential to realize Zionism in a slightly different way, by bringing money to Israeli businesses and selling Israeli ideas overseas.”

His father convinced him to jointly establish a factory to produce fiber optics for communications.  It became clear at this point to all parties what was going to become of the child who never finished his university degree (“in the end, those who helped me were two Jewish women professors who waived two courses, so that I  actually finished my degree.”)

In the 1990s, he established Israel Seed Partners with Neil Cohen (founder and managing partner), Michael Eisenberg (from the Aleph Fund) and Allan Feld (Vintage Fund) which raised $260 million and was one of the surprising success stories of Israeli high-tech.

“I get up every morning and help people make their dreams come true – what more can I ask for?”

At a certain stage, the kippah appeared on his head.

He admits that if someone would have told that hippy youth from Berkeley that one day, he would observe the Shabbat, surrounded by his nine grandchildren at a Friday night dinner, he would have been highly skeptical.

“But it looked natural to me at a certain stage.  The kippah I put on in Israel, and from my standpoint, I only see the beautiful sides of our religion. I accept all of the prohibitions, of course, but when you look at Judaism in its entirety you must agree that it is a beautiful religion that has a lot of happy moments, that I love and do not want to go without them.”

“Therefore, you see that the Haredim are also making their way to Israeli high-tech, as this is the number one developing sector in Israel.  It’s not written anywhere in the Torah that you have to be poor.  Jews from time immemorial worked hard, were very religious and made a good living, it always went hand in hand.”

At this week’s conference, he will make several speeches, with the central thesis being that – with all due respect to real estate and other sectors, the growth engine of the local economy is primarily Israeli high-tech, and the quicker the state understands this then the order of priorities will change and investment in high-tech will stand on equal footing between the military and medicine.

“Anyone who says that Israeli high-tech worries only about itself and the money remain within the sector, doesn’t know what he is talking about,” says Medved.  “I am not only referring to taxes that huge companies pay, but to the entire framework of support.”

“A man and a woman who work in high-tech often use the services of a babysitter, the companies organize conferences in all parts of Israel, the accommodation supplies a livelihood for thousands of people, the house cleaners and the laundry in the neighborhood and the building we are sitting in houses a number of startups. When all is said and done everyone benefits from the big money in high-tech and not of real estate.”

Seemingly, the world from where Medved comes appears far from that is the average Israeli. But here is where Medved’s stubbornness comes into play: “In the supermarket of our ideas, everything is accessible. True not to everyone, but for those described as accredited investors. In every country, there are regulations that determine what kinds of private initiatives people with resources are permitted to invest in.  In the US they must have $1 million for investment, in Israel the figure is NIS 8 million ($2.3 million).

“We checked and found that there are 160,000 households in Israel with a capital of $1 million, excluding their residence, we are talking about liquid cash. In the US the estimate is 14 million households. This is our target market, and we are targeting the small investor who can take part with us on this journey, which of course has risks, but with us you also know exactly what you are getting into.”

Among the investments in this “supermarket” are attempts to find a cure for the coronavirus or innovation in the forecasting of weather in order to help third world nations improve their situation, to name a few.

In the end, he says, this is the inconceivable reality in this country that requires us to constantly reinvent ourselves in every field.  This is directly connected to the history of the Jewish people as well as to the daily reality.

“I was among the first to speak of Israel as the Startup Nation,” Medved says proudly.  “And I say to you today, that despite all of the difficulties and political uncertainty, innovation will not stop, and one can be optimistic when looking at our future here. High-tech companies will flourish and there will be even larger exits than we have seen so far.”