Among them were individuals from each of the 22 countries of the Arab league.

“It’s an absolute pleasure that every one of the Arab states is represented here at the OurCrowd summit, either in person or through the live stream,” OurCrowd founder and CEO Jonathan Medved told JNS. “This is long overdue, and the fact that Israelis and Arabs all over the world are now working together for innovation and to bring new technologies to work for the benefit of humankind is a blessing and good news for the world.”

Medved, who spoke in December at the SALT Abu Dhabi global market conference, became the first Israeli venture capitalist to speak publicly in the Gulf States.

In its eighth year of operation, the Israel-based OurCrowd has become a leading global venture investing platform and Israel’s most active venture investor. Its 2020 summit represents the largest tech event in the Middle East, the biggest business event in Israel’s history and the largest equity crowdfunding gathering in the world, according to Eric Brand, director of corporate marketing for OurCrowd.

At a press briefing the morning of the summit, Medved referred to the incredible growth of Israel’s startup and tech ecosystem, saying “an ecosystem that behaves that way is remarkable.”

OurCrowd’s growth of more than 2,000 percent in annual investment commitments and the number of investors since it was founded in 2013 has certainly helped contribute to the nation’s success. At the summit, it announced that it has gained more than $500 million in new funding commitments in 2019, invested in 38 new portfolio companies and had eight exits during the year, including the two most prominent IPOs of 2019: Beyond Meat and Uber. OurCrowd portfolio companies have now achieved 36 exits. 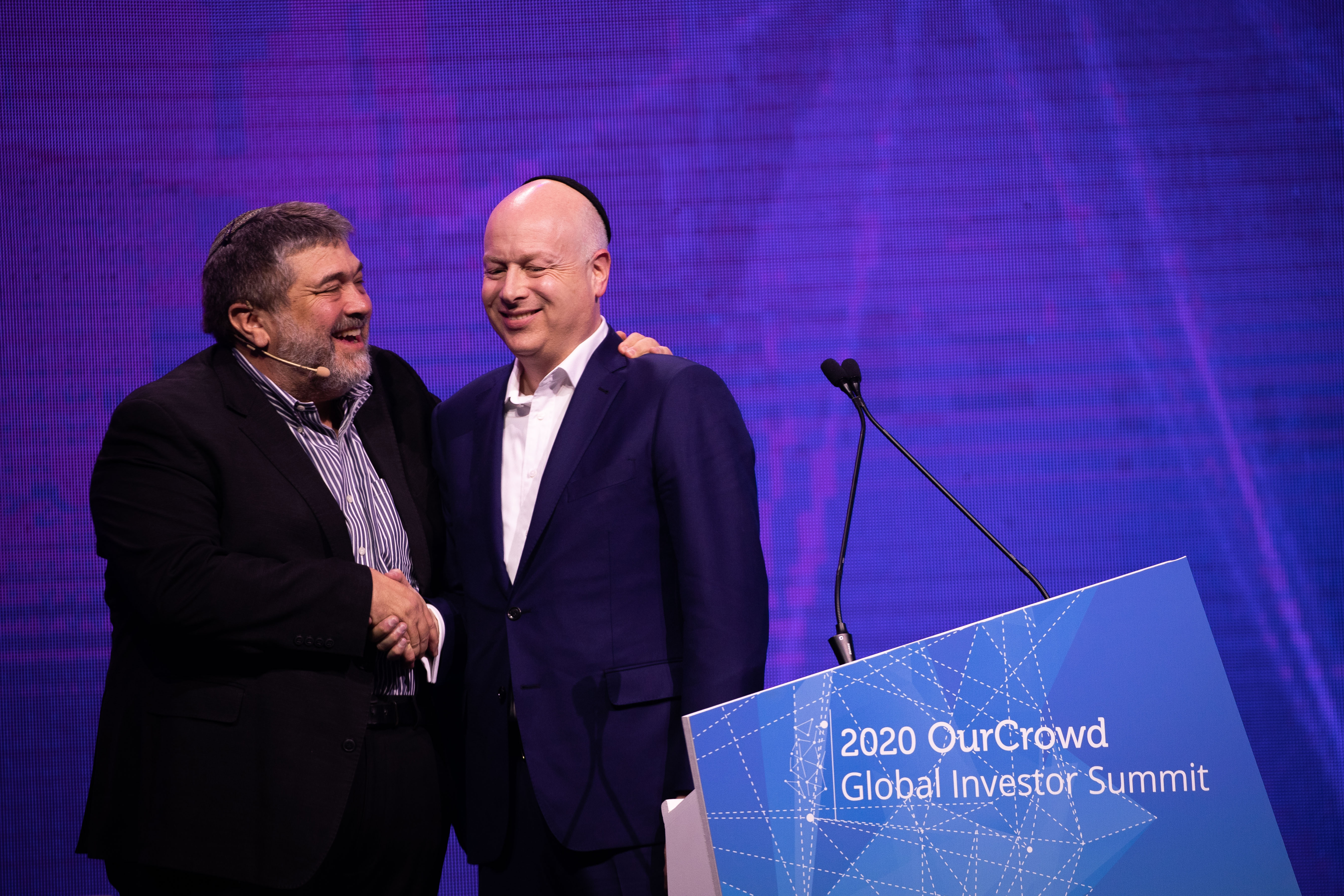 Former U.S. Special Envoy to the Middle East Jason Greenblatt speaks at the OurCrowd global investor summit at the International Conference Center in Jerusalem on Feb. 13, 2020. Photo by Yonatan Sindel/Flash90.

After the notable achievements of the Israeli-tech ecosystem over the past 10 years, Medved looked forward to the coming decade, maintaining that it often takes a decade for companies to “become leaders.”

“In order to continue this exponential growth, we will need to redouble our efforts in the seed and early-stage investment arena, as well as strengthen and leverage our growing network of global investors. Together, we can make this next decade a truly Roaring Twenties,” he said.

A long-term view proves difficult for most people, but particularly Israelis, said Medved, who he believes “are better at creative innovation and improvisation than planning.”

Overall, he claimed, Israel’s culture is what has made the country a breeding ground for new technologies and investment. “We have a long-standing tradition of turning curses into blessings,” he said. “The question is not if there are going to be threats—there are always threats, and Israel will have threats forever—but the question is how to turn them against the enemy in a martial-arts-style maneuver.”

In a country with scarce water, for example, Medved noted that Israel has become a global leader in water technology. Without natural resources, the Jewish state has to focus on human resources.

While “there is an exceptional risk acceptance pioneering,” said Medved, “Israeli culture is throbbing and pulsating with entrepreneurship, and it’s all about culture. It’s not about what’s in the ground or growing above ground, but rather, it’s about the spirit of the people. This country has always been a country of spirit and its best expression is in its technology.”

At the opening plenary of the summit, Jerusalem Mayor Moshe Lion said that Medved “has helped put Jerusalem at the center of the map for startups, tech, investment and for the future. Building for the future is also the message of Jerusalem. We have a long history of planning for the future to face challenges and opportunities today and also tomorrow.”