Will Irwin, right, at an OurCrowd conference in Jerusalem writing his name, February 13, 2020. (Shoshanna Solomon/Times of Israel)

When the hand tremors of 72-year-old Will Irwin, the CEO and owner of a Rochester, New York-based telemedicine firm, got worse, he was tipped off by a friend about an Israeli technology that uses ultrasound to help reduce Parkinson’s tremors.

He scouted around in the US to see who was using the technology and through an acquaintance in Israel, Jonathan Wiesen, who’s in charge of medical investments at the Jerusalem-based VC fund OurCrowd, Irwin got in touch with Prof. Gordon Baltuch, a professor of neurosurgery at the University of Pennsylvania. Baltuch was using the technology developed by Israeli startup Insightec to treat patients.

Insightec has developed a non-invasive technology that uses high-intensity focused ultrasound beams to help alleviate ailments like Essential tremor, which causes involuntary trembling of the head, hand and voice, and Parkinson’s disease, which causes uncontrolled movements in different parts of the body. Both illnesses affect the lives of millions of people around the world, turning easy and yet fundamental actions into tasks that are difficult to achieve or to complete efficiently.

Essential tremor, a neurological disorder that commonly has a hereditary nature, affects more than 41 million people around the world and is thought to originate from a part of the brain called the VIM point — the ventral intermediate nucleus — which is responsible for coordinating and controlling muscle activity.

To reduce the symptoms, Insightec has developed a treatment that allows neurosurgeons to perform an incisionless brain surgery to ease tremors associated with Essential tremor and Parkinson’s disease.

In the procedure, the high-intensity focused ultrasound beams, which pass through skin, muscle, fat and bone, are used to generate heat and ablate the VIM point, leading to an overall reduction of tremor.

“I couldn’t eat without spilling, or button my shirt, or use the keypad on my cellphone,” Irwin said in an interview with The Times of Israel on the sidelines of the OurCrowd conference in Jerusalem last week, where he shared his story to the audience. OurCrowd is an Insightec investor.

“I couldn’t drink coffee, and my grandkids would always ask ‘grandpa, why do you spill all the time?’” he said. Attending business meetings where food was served had become “impossible,” he said. 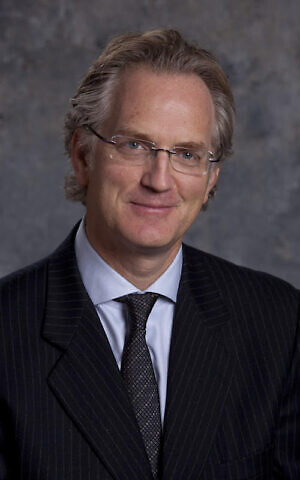 Prof. Gordon Baltuch of the University of Pennsylvania medical center in Philadelphia. (Courtesy)

So, he scheduled an appointment with Baltuch to see if he was qualified for treatment, and was approved. “Within 30 seconds I knew I qualified, because the shaking was so bad,” Irwin said.

He then scheduled an intervention, “as soon as they could take me.”

On the day before the procedure, physicians performed a CT scan of his brain to see whether the beam of sound waves could penetrate his skull and detail its shape, density and thickness. Preliminary MRI images were also taken to identify the precise location of the nerve routes that cause the tremors.

“They put you in an MRI machine and map the nerve routes in the brain that cause the essential tremor,” Irwin said. And with the high-energy sound wave, they burn the nerve routes using a helmet-like frame that emits the beams.

“I was awake throughout,” he said. “I didn’t feel a thing although they gave me a light sedative. They talked to me and also made me write something, to see if my handwriting abilities had come back. They had.” 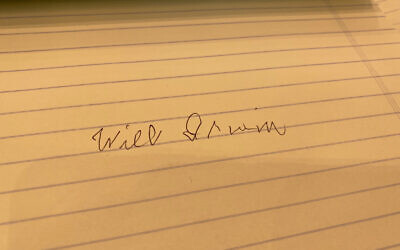 Will Irwin’s signature as he signed at an OurCrowd conference in Jerusalem, February 13, 2020. (Shoshanna Solomon/Times of Israel)

“Now I can write normally,” he said. He signed his name, “Will Irwin,” on a yellow notepad: “I was not close to doing that,” he said proudly, showing the slightly shaky but definitely readable outcome.

“It is a fabulous treatment,” Baltuch told The Times of Israel. “The results are very good, both for Essential tremor and Parkinson’s.”

He has for years been using a treatment for Parkinson’s and Essential tremor called deep brain stimulation, a surgery that involves planting a device inside the brain which delivers electrical impulses to the tissue.

Deep brain stimulation is an effective treatment, said Baltuch, who has performed the procedure roughly 1,000 times. However, there are drawbacks. It is invasive, and cannot work for everyone, such as people using immunosuppressant drugs.

Irwin, who registered most of the shaking on his left hand which he also uses to write, underwent the intervention for just one side of his brain, as Insightec’s FDA approval is just to cure unilateral tremor, or the tremor on one side of the body. His right side is also a bit shaky these days, but not as bad as the left had been, before the intervention.

Irwin spent that night in hospital and the next day had some swelling in his face and a mild headache which “gradually dissipated over the weekend.” By Monday morning, he was back at work and “I no longer shook.”

“I couldn’t even hold a pencil to a piece of paper,” he said. The reason he was here, in Israel was to tell people to do the intervention and also to invest in companies like Insightec. “I’d also speak to anyone in the US to encourage the adoption of the technology and other new things,” he said.

His insurance firm also agreed to pay him back part of the expense of the procedure, he said. “The hospital told me I am probably the first patient that ever got a refund from the insurance,” he said.

Before undertaking the intervention, Irwin said, he did a lot of homework and also contacted other patients who had undertaken the procedure previously. They all said they did not have a recurring of the shaking symptoms, he said.

Even so, he was “worried” because there is no track record.

“I was worried about the procedure, but also motivated,” he said. His wife was nervous, too, but she was “thrilled for me.”

Baltuch said he has some 150 patients waiting for an Insightec treatment, and has seen an 80% success rate with the procedure.

“People want this. They don’t want an incision,” he said.

The new procedure has its downside. It can only treat tremors on one side of a patient due to the FDA regulations, it requires the patient to shave their head, and it doesn’t work with some people’s skull which are too thick or irregularly shaped.

Insightec was founded in 1999 and has its corporate headquarters in Tirat Carmel, Israel, with global offices in Dallas, Miami, Tokyo, and Shanghai.

Insightec firm obtained FDA approvals for its technology in 2016 and 2018.